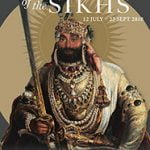 Over 100 dazzling artworks and objects tell the story of a cosmopolitan empire that almost ended British rule in India. This summer heralds a major exhibition telling the story of the last great native kingdom which challenged the British for supremacy of the Indian subcontinent. ‘Empire of the Sikhs’ will be on view at the Brunei Gallery, SOAS from 12 July to 23 September 2018.