The film of the lecture by Dr Christopher Phillips on The Syria Conflict Today (10 January)  is now on our website for members only.

With Havelock at Lucknow 1857: City, Siege and Resistance

Dr Rosie Llewellyn-Jones OBE and Sir Mark Havelock-Allan QC, 5th Baronet of Lucknow and great-great-grandson of General Sir Henry Havelock, analyse the Siege of Lucknow and the attempts to relieve the beleaguered garrison. One of the most dramatic episodes of the Indian Mutiny.

It is often overlooked that Britain’s most recent military involvement in Afghanistan is the fourth in a string of conflicts dating back to the nineteenth century. Determined to safeguard British India’s borders, the British fought three campaigns on Afghan territory between 1838 and 1919. The Anglo-Afghan wars of the 19th and early 20th centuries resulted in some of the worst military calamities ever sustained by the Raj in this part of the world. In the first war alone, a column of 16,000 soldiers and civilians was annihilated on the retreat from Kabul. Jules Stewart’s talk looks at the lack of understanding of Afghanistan and its people that led to disaster and considers the lessons to be learnt.

Jules Stewart is author of On Afghanistan’s Plains, The Savage Border and five other books on Afghanistan and the North West Frontier.

A sequel to Steve Coll’s Ghost Wars, he describes the four stages of America’s Afghan adventure (reviewed by Sherard Cowper-Coles in Saturday’s The Times)

Muhammad Khan, a maths teacher, has said he was inspired to write the book by news reports about 3 teenage girls leaving an east-London school to join Islamic State. He has created a powerful, sophisticated and intensely likeable female narrator in this thrilling novel.

“Can an army of orangutan guerillas save the Indonesian rainforest? Why is China creating a retirement haven in the South China Sea for rich despots? What happened when the descendant of the over-sexed first White Rajah of Borneo returned to claim his throne? How did Filipino “love sorcerers” help swing a U.S. election? Can an American pilgrim find enlightenment through carnal escapades? How can Asia’s first “shaman university” repel attacks by rogue black-magic wizards?  And why is Indonesia’s Mermaid Queen really angry and not going to take it anymore?

Exceptional Encounters takes the seeds of true stories and applies the classic fiction writer’s aerobic exercise by asking: What if? These enhanced-reality fabulations draw the reader into tales of just over-the-rainbow Asian kindness, greed, ambition, passion, and dreams.

Finishing on 29 January, an exhibition at the Supreme Court entitled Law and Nationhood: South Asia at 70

The Collecting in the Clouds exhibition at the RHS Lindley Library, 80 Vincent Square, London SW1 –  this free exhibition closes on 2 March 2018

Plus a free talk entitled ‘Yours and a Crowd’, about George Forest, on the evening of Tuesday 13 February (6pm). Limited places so book your seat via library.london@rhs.org.uk or ring 020 7821 3050. https://www.rhs.org.uk/shows-events/viewevent?EFID=742&ESRC=CMS

Hungarian drama about a Syrian refugee who gains the ability to fly.

Also at 9pm, on Viceland channel, the animated film Akira (1988) directed by Katsuhiro Otomo, and based on his best-selling manga comic.

Monty Don’s Paradise Gardens Part 2, BBC Two, Friday 26 January at 9pm. In Turkey, he is dazzled by tulips and in India discovers the spirituality of Indian tomb gardens. Catch up on Part 1, looking at the origins of Paradise Gardens in Spain, Morocco and Iran 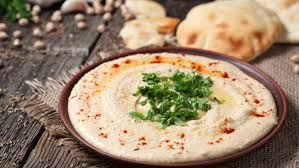 400g can of chickpeas

Rub the drained chickpeas in a tea towel to remove the skins (this helps make a really creamy hoummous). Place chickpeas, crushed garlic, cumin, Tabasco, juice from half the lemon, 1 tbsp olive oil, salt and pepper in a food processor. Blitz.  With the motor running, add the rest of the oil and the hot water in a dribble until smooth like custard. Adjust the seasoning and transfer to a bowl.