Over the Great Wall and Far Away

A lecture by William Lindsay OBE 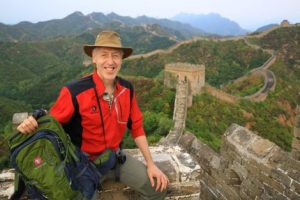 A childhood fascination of the Great Wall of China meant that in 1986, William Lindsay OBE moved to China and became the first ‘foreigner’ to walk the full length of it. He recounted his experience in his first book Alone on the Great Wall in 1989. He has since written 5 more books on the subject and is a campaigner for its conservation. In 2016, he and his sons spent 60 days filming the wall with a drone. William also runs a successful company for tours to the wall https://www.wildwall.com

In 2016 William received a Special Award from the RSAA, this being presented to him by the British Ambassador in 2017. We are pleased that, on a rare visit to the UK, he has offered to give us a talk on his specialist subject of the Great Wall of China. This is in addition to the talks listed on our current lecture card.