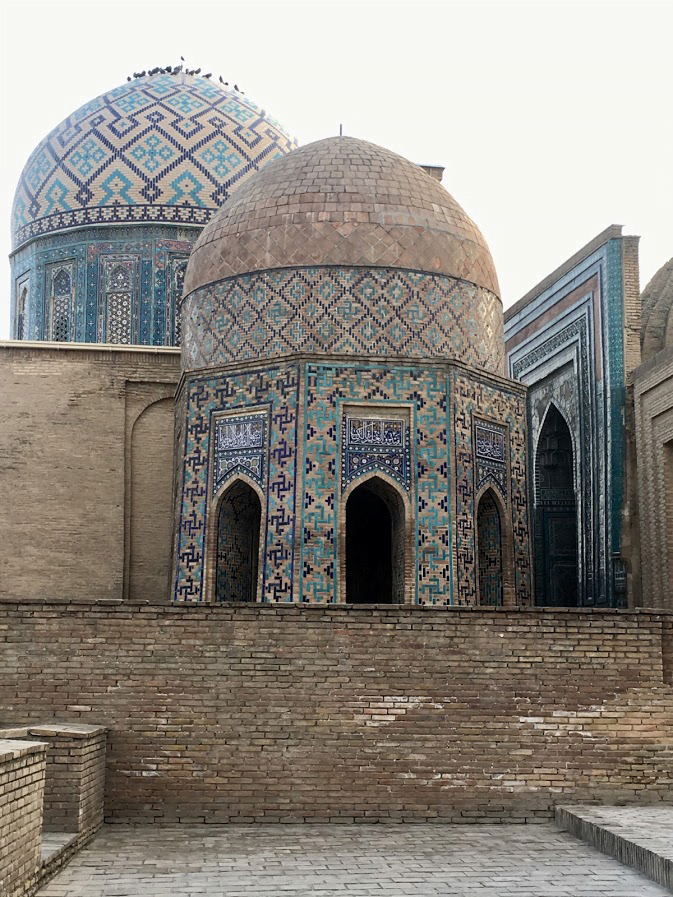 Sophie Ibbotson, a Trustee of the RSAA, reports on progress in combatting cultural theft

This week, the British Museum put on display six large epigraphic glazed tiles which were seized by UK Border Force at Heathrow Airport in 2020. Jonathan Williams, the museum’s Deputy Director, declared them to be, “exquisitely beautiful and redolent of the cultures of Central Asia,” and “[opening] a window for the public to the extraordinarily rich cultural heritage of Uzbekistan.”

The circumstances which led to the exhibition would make a good crime novel plot. A passenger from Dubai was flagged as having a suspicious flight pattern, and was intercepted on arrival in London. He carried a suitcase containing tiles but no clothes, and presented a false declaration stating he had purchased replicas “made to look old” in Sharjah the previous day. He had, he claimed, paid just 315 DH (about £70) for them, a fraction of the tiles’ true black market value as they are highly collectible and in excellent condition. Thankfully, Border Force’s staff are trained to spot signs of smuggling in all its forms. The tiles were passed to the British Museum for verification, and forfeited by the importer.

Dr. St John Simpson, Curator of the British Museum’s Department of the Middle East, is responsible for developing a process by which stolen or illicitly trafficked antiquities identified by the museum can be exhibited, published and repatriated to their countries of origin. In the past decade, Simpson and his colleagues have helped return more than 2,500 objects home. In this particular case, nine experts from seven countries concluded unanimously that the tiles came from Transoxiana (a region centred on modern-day Uzbekistan, but including parts of Kazakhstan, Kyrgyzstan, and Tajikistan). The tiles’ three-colour glaze — white, turquoise, and cobalt blue — is distinctive of the Chagatai Khanate, and dates them from the late 13th to mid 14th centuries. Specialists believe that at least some of the tiles came from the Shah-i Zinda, the magnificently decorated necropolis that is part of the UNESCO World Heritage Site of Samarkand. Excavations and restoration work were carried out at the Shah-i Zinda in 1996 and in the early 2000s, and a number of glazed artefacts found at this time remain unaccounted for.

“It is unfortunate that such pieces of our cultural heritage have been smuggled,” said HE Said Rustamov, Uzbekistan’s Ambassador to the UK, at the ceremony marking the tiles’ first public appearance. “But it is fortunate that Uzbekistan has such wonderful friends and partners, including the British Museum and UK Border Force, to identify and return our cultural heritage.” The tiles will be on show at the British Museum until 1 August 2021, and will then be handed over to the Government of Uzbekistan. Simpson hopes that it will be possible to identify the exact place that they came from in Uzbekistan and to exhibit them there.

This is the second time in recent years that the British Museum has been able to identify and successfully repatriate tiles to Uzbekistan. A glazed tile from the Chashma-i Ayub in Vobkent, stolen in 2014, turned up for sale in a Mayfair gallery and was spotted by an Oxford scholar in a catalogue. It was returned to Uzbekistan in 2017 to be put back in situ on the facade of the 13th century monument it was prised from.

Uzbekistan’s relationship with the British Museum, which includes a new memorandum of understanding to collaborate on research and training, as well as antiquities trafficking, is indicative of the country’s growing commitment to cultural heritage preservation and promotion. Uzbekistan has more than 8,000 cultural heritage sites, including five UNESCO World Heritage Sites, and, as President Mirziyoyev told parliament at the end of last year, “We need to preserve and pass on to future generations the cultural heritage of our people.” Formation of identity and education of youth — today and tomorrow — are pressing considerations in a country where the median age of the population is just 27.8 years (compared to 40.5 years in the UK).

As part of his wider social and cultural reform agenda, in June 2021 Mirziyoyev created a new Cultural Heritage Agency under the Ministry of Tourism and Sports led by Deputy Prime Minister Aziz Abdukhakimov. Its initial budget of 420 billion soums (approximately £28.5 million) will be invested not only in the protection of physical sites, but also developing museum activities, supporting archeological research, and building international partnerships. He noted that in the past there has sometimes been a “negligent attitude towards this issue,” but that going forward there would be greater engagement not only from the Ministry of Culture but also from local khokimiyats (municipal governments), the media, and the general public.

Engagement with international partners is essential, too, as Uzbekistan builds capacity and roles out best practice within its institutions. The Cooperation Programme signed between  Mirziyoyev and Audrey Azoulay, Director General of UNESCO, in 2018 is flourishing. The agreement covers a wide range of topics, from education and media literacy to biodiversity and the preservation of Uzbekistan’s tangible and intangible cultural heritage. UNESCO’s International Cultural Forum, “Central Asia at the Crossroad of World Civilisations”, will take place in Khiva in September, and is expected to attract around 300 participants. Bukhara has applied to be recognised as a UNESCO City of Literature, and it is hoped that a number of the sites currently on Uzbekistan’s Tentative List will soon be granted World Heritage Site status.

Many of Uzbekistan’s partnerships and activities are being coordinated by the Art and Culture Development Foundation (ACDF), which sits within the Ministry of Culture. Some of their projects are domestic, such as the reconstruction of the State Museum of Art and the creation of the Centre for Contemporary Arts in Tashkent, but others are focused on building relationships and increasing cultural engagement abroad. Thanks to ACDF, Uzbekistan has a national pavilion for the first time at this year’s Venice Biennale. It is an interdisciplinary installation exploring life and identity in Uzbekistan’s mahallas (urban neighbourhoods). A series of high profile international exhibitions are on the way in 2022: “Splendour of Central Asia: On the Caravan Routes of Uzbekistan” will be held at the Louvre Museum; the James Simon Gallery in Berlin has scheduled “The Heritage of Central Asia: Kushan Civilisation” exploring Uzbekistan’s history from the conquests of Alexander the Great to the rise of the Kushan Empire; and an elaborate Silk Road exhibition will be staged at the Arab World Institute in Paris and then at the National Museum of China in Beijing. Discussions are also underway with the British Museum to bring some of Uzbekistan’s treasures to London in a future Silk Road exhibition.

The Cultural Legacy of Uzbekistan organisation, led by Firdavs Abdukhalikov, focuses on the study, preservation, and promotion of cultural assets. It is identifying Uzbekistan-linked manuscripts held in foreign collections synch as the British Library and Bodleian Library, many of which have not previously been digitised or published, and making facsimile copies for archives. Cultural Legacy also runs a major book publishing and documentary film project, “Cultural Legacy of Uzbekistan in World Collections”, showcasing material objects, customs, and traditions to English, Russian, and Uzbek speaking audiences.

Uzbekistan will celebrate 30 years of independence this September. Mirziyoyev’s vision for the country at this symbolic juncture is what he terms “the Third Renaissance,” and in the culture and heritage space, Uzbekistan is striding towards that goal. As with the Renaissance in medieval Europe, a period of great social change is proving a fertile ground for the development of the arts. Uzbekistan’s own past is no less rich a source of inspiration than the history of Ancient Greece and Rome, and the current matrix of institutions and activities, at home and abroad, may well prove to be the springboard for a creative Golden Age.