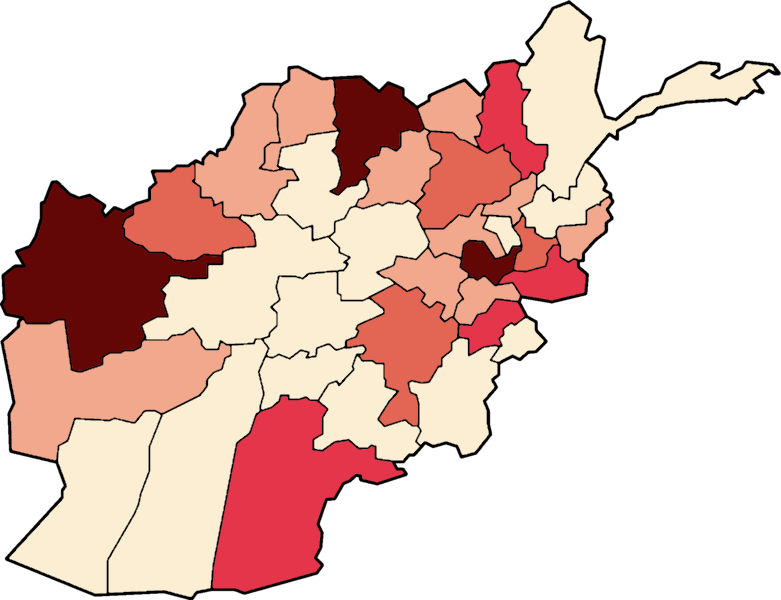 On Eid this year, a bizarre scene unfolded in eastern Afghanistan.  Government officials, led by the national security advisor, prayed at the grave of former socialist president and secret police chief, Mohammad Najibullah. Najibullah came to power during the Soviet-Afghan War as a proxy of the USSR. But the waning Soviet Union cut off funding, and his regime swiftly collapsed. Civil war ensued, and he was murdered by the victorious Taliban in 1996.

Thanks to coronavirus, the current Afghan government might suffer a similar fate. Its main foreign backer, the US, is currently withdrawing, as the Soviet Union did in the 1980s, and may accelerate its pullout due to concerns about the virus. COVID-19 has also smashed the American economy, and could lead the US government to cut off financial aid. If that happens, the Afghan government will almost certainly disintegrate.

Afghanistan is uniquely ill-prepared to cope with this pandemic. More than forty years of conflict have left the country in ruins, with crushing poverty and a desperately weak healthcare system. Given that even developed states like the US and UK are struggling to respond to COVID-19, what hope does that leave for one of the poorest countries in the world, which last year ranked 170 out of 189 on the UN Human Development Index?

So far, however, the figures seem to be mercifully low, with around 18,000 infections and 300 deaths. Afghanistan’s infection fatality rate (the percentage of those infected who die) is below 2%. Britain, by contrast, has a rate of 14%, Italy 14.3%, and France 15.2%.

South Asia has seen surprisingly few fatalities from the coronavirus. In India, for example, around 3% of those infected have died. In Pakistan, Bangladesh, and Sri Lanka, the rate is even lower. The reasons for this are unclear. Some have hypothesized that young demographics make South Asian people more resilient to the disease. In Afghanistan, for example, 60% of the population is under the age of 25.

But the data is likely incomplete. Many people might die at home, either because they cannot afford a trip to hospital, or because widespread violence makes travelling dangerous. The cause of death in corona patients may not be identified, given that test kits are required to diagnose dead people with the virus, and there is a massive shortage of equipment in Afghanistan.

So far, Afghanistan has only tested a tiny proportion of its 37 million people, and the real infection rate is likely much higher. Indeed, a random test of 500 people in Kabul revealed that one third had contracted the virus.

The government has estimated that 25 million Afghans could eventually be infected. If even a small percentage of that number require hospitalization, the country, which has little more than 10,000 hospital beds, will be overwhelmed.

War makes Afghanistan especially vulnerable to the virus. The conflict with the Taliban has been escalating since international forces started to withdraw several years ago and now ranks as the deadliest in the world.

A peace deal signed by the US and Taliban in Doha in late February offers some hope. Under the terms of the agreement, the remaining American forces will depart gradually in the next fourteen months in return for a Taliban commitment to renounce terrorist groups such as Al Qaeda and negotiate a political settlement with other Afghan political factions, leading to a ceasefire.

The US has started to remove its troops, but concerns about coronavirus spreading in the ranks are accelerating the withdrawal. American officials apparently believe that fifty percent of the Afghan security forces have contracted the disease. President Trump may reportedly pull out completely in time for the US presidential election in November this year, way ahead of the May 2021 deadline stipulated by the Doha agreement.

A weaker American troop presence could undermine the peace process. Foreign countries might cut financial assistance to Afghanistan as their own economies reel from coronavirus-related lockdowns. This would quickly annihilate the Kabul government, which depends on foreign aid for 75% of its budget.

Even before the virus struck, poverty had been increasing in Afghanistan, and 80% of Afghans now live below the poverty line. According to recent data, Afghanistan has one of the lowest life expectancies in the world, and some of the highest rates of infant and maternal mortality. Chronic medical conditions such as measles are endemic.

Afghanistan is also especially vulnerable to climate change, with recurrent natural disasters such as a severe drought in 2018-19 and flash flooding last year. Those destroyed people’s homes and livelihoods, exposing more than ten million Afghans to acute food insecurity even before corona emerged.

The pandemic has forced the UN to issue a famine warning. The country relies on imports for most of its basic food, including wheat. But supplies have been restricted, driving up prices. Lockdowns of cities threaten daily wage labourers. The World Bank forecasts a “deep recession” in 2020, after years of sluggish growth and high unemployment.

The government has found it hard to enforce social distancing. This should come as no surprise given Afghan cultural norms that include regular mosque attendance and frequent physical contact. Added to that, households in Afghanistan often contain several family members living under a single roof, increasing the risk of infection.

The country’s borders are also porous, making it easier for people to enter and spread the virus. Between 1.5 and 3 million Afghans live in Iran. Even before the pandemic, Afghans were flooding back across the border as the Iranian economy weakened. Millions of people have also been displaced internally by the conflict and recent drought.

Already this year, hundreds of thousands of Afghan migrants have returned home. There are no quarantine facilities on either side of the frontier, and few medical checks. It is no surprise that Herat, on the border with Iran, has been the epicentre of the outbreak.

Tens of thousands of people have also crossed over from Pakistan. The border was sealed initially, but the Afghan government begged for it to be opened so that stranded Afghans could return. Efforts to quarantine returnees failed.

Then there are the tens of thousands of prisoners living in filthy, overcrowded Afghan jails with inadequate medical care, making them particularly vulnerable to the spread of the virus. The Afghan government has decided to release at least 10,000 prisoners to slow the outbreak.

Weak healthcare is a major problem in Afghanistan. Hospitals are understaffed. There are 0.3 doctors per 1000 people. There is a lack of personal protective equipment. Many medics have contracted the virus, but must continue to work given staff shortages and the demands of the war. Ventilators, hand sanitizer and testing capacity are very limited.

Medical facilities have been targeted by insurgents throughout the conflict and forced to close. One of the worst attacks occurred in May, when Daesh terrorists stormed a maternity hospital in Kabul, killing mothers and babies. The hospitals that still function are becoming increasingly expensive. Only 25% of Afghans have access to quality healthcare.

The Taliban operates a shadow government in areas that it controls, including a health commission that oversees medical care. The group responded to the corona outbreak with videos and messages advertising its efforts, including a film of socially-distanced hygiene workers in white protective gear receiving instructions.

Whether the group is actually doing anything to combat the virus is another matter. The Taliban was reportedly using a fake thermometer gun to test people’s temperature, for example. The organization is very adept at employing propaganda as part of a hearts and minds campaign to win over the rural population and boost its legitimacy.

Despite all this, there are glimmers of hope. Months of political chaos following a disputed presidential election last September recently came to an end, when the two contenders, president Ghani and former chief executive Abdullah Abdullah, reached a power-sharing deal. Both the Taliban and Afghan government honoured a three-day ceasefire over Eid, and more prisoners have been exchanged.

But the situation is still very precarious. The Ghani-Abdullah deal is vague and fragile. High-level members of the Taliban have reportedly been infected with the virus, weakening the group’s unity and increasing the risk of infighting at a time when it is supposed to be negotiating. Intra-Afghan talks have been delayed, and, even if they begin, progress will be slow given the volatile nature of Afghan politics and intensifying public health emergency.

The coronavirus may be with us for some time. Previous pandemics have been lengthy affairs. The Spanish Flu, for example, lasted for years, and its second wave of infection was even deadlier than the first. There is a real risk that Afghanistan will buckle under the pressure and descend into another period of civil war. One can only hope that it defies the odds and avoids such a catastrophe.