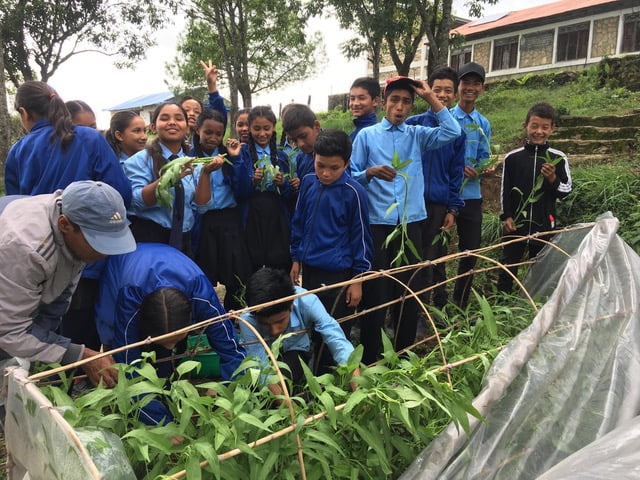 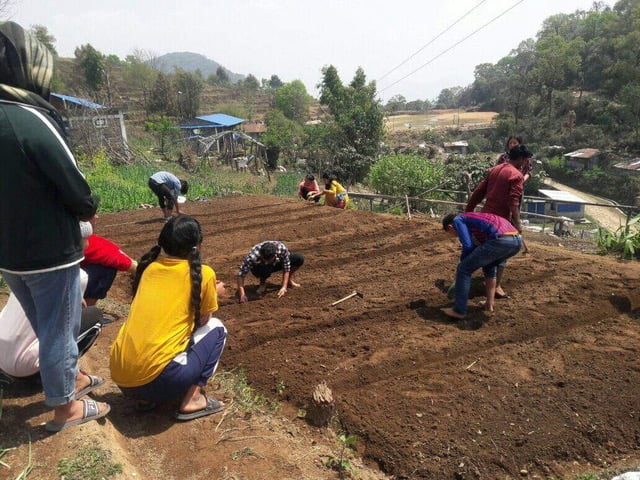 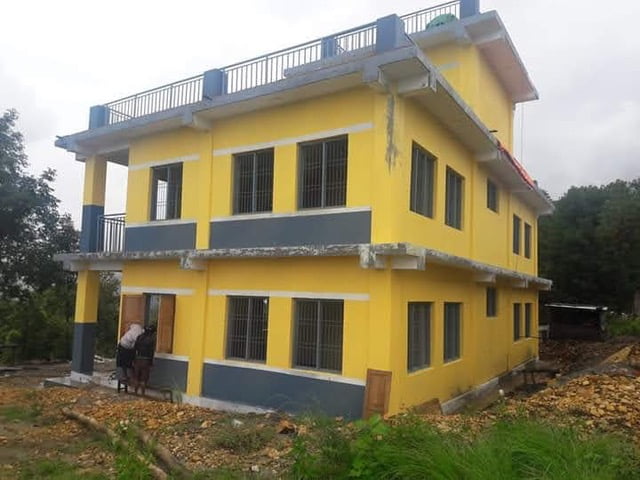 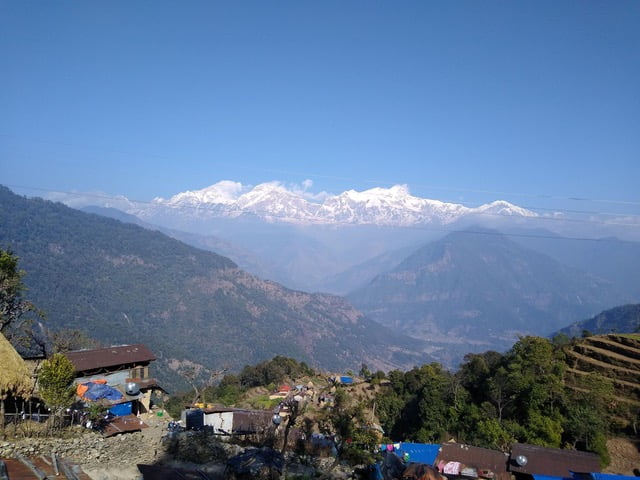 Nepal is home to the most formidable mountain range in the world. It annually welcomes upwards of a million tourists to engage in adventurous sports, trekking and to visit its remarkable UNESCO world heritage sites. Its unique culture, hospitality and environmental diversity make it an attractive tourist destination for anyone looking to head off the beaten track. However, despite the Ministry of Tourism’s efforts to draw in a record-beating number of visitors in 2020, COVID-19 lockdowns during March stopped entry into the country almost completely.

Across the world COVID-19 has exposed and compounded underlying inequities and failings within state provision of public goods. Nepal was no exception. During the last two years the Nepali education system has failed to adapt adequately to the ‘new normal’, lockdowns have led to exams being cancelled and lessons being moved online. In a country where the internet is not universally accessible and very few students have devices which allow them to engage with online learning, this has meant a complete stop to education for many. A notable increase in child labour, forced underage marriage, and gender-based violence has especially impacted girls. Not many have returned to education now that lockdowns have been lifted.

The mental health impacts of the pandemic and its lockdowns on the next generation will have serious long-term effects. These will particularly affect those children with learning disabilities and pre-existing mental health issues, who are rarely recognised let alone provided with the additional support and assistance they require whilst in education.

However, COVID-19 has only added to long-term entrenched failings within the Nepali education system. This system has remained un-reformed in a country preoccupied with the ongoing consequences of a devastating 2015 earthquake, endemic corruption, and societal fragility following the end of a decades-long civil war in 2006. The Nepali education system was last restructured in 1971 to provide primary and secondary education for five- to sixteen-year-olds, with students then able to attend a fee-paying academic or vocational college for two years before progressing onto university level studies or equivalent vocational education.

On paper this seems like a well-structured and logical system. However, as is so often the case, this does not translate into reality. Rural areas, in particular, are severely restricted in their ability to access a good quality and varied education, with a limited syllabus based on the resource allocation to each school. Most rural primary and secondary schools are unable to run classes on creative subjects such as art, music and sports despite being part of the syllabus. This is due to a lack of teaching staff and a limited budget for additional equipment and resources. Consequently, this restricts students to traditional academic subjects such as history, science, maths and languages, undermining their experience of a full and diverse education.

This focus on purely academic subjects often sees those students who are not academically motivated struggle through their education, unable to attain the grades required to advance to higher academic education, with their life prospects consequently being stunted. The Nepali education system’s answer to this is fee-paying vocational colleges that provide students an opportunity to learn a practical skill and gain additional qualifications in areas such as agriculture, medical technology, IT, plumbing, or carpentry.

However, the reality of the situation is that in rural areas very few vocational colleges actually exist. Where they do exist students are required to pay tuition fees, and if they travel away to college, there are additional accommodation fees that are often unaffordable. This exacerbates the issues faced by young people who are not academically minded as well as by students who are economically disadvantaged, particularly those of a ‘lower’ caste. The caste system, although legally abolished in Nepal, still persists in social attitudes and is most notable in the education system. In 2016, for example, only 23% of the lowest caste (the Dalits) were literate in contrast with 80% of the highest castes (the Brahmans and Chhetris).

Those students who drop out of education in rural areas because of underperformance or a lack of financial support often have very few opportunities for good-quality paid employment. As a result they either end up in low-paid work or supporting their parents through subsistence farming. This is illustrative of a nation-wide youth unemployment rate that has doubled over the last ten years, putting pressure on an already struggling economy and predominantly young population.

Those who do manage to get low-skilled employment with an agency are often sent overseas, usually to the Gulf countries, to work in poor conditions on construction sites and in hospitality. This exodus of workers from the Nepali economy is coupled increasingly with high-achieving academic students leaving the country to study and to gain better quality and higher-paid employment outside Nepal. The consequent brain-drain and lack of low-skilled workers impacts not only the Nepali economy but also its government, civil society and ultimately the countries development.

In the absence of a proactive state eager to reform and diversify the Nepali education system, international aid agencies and over one hundred international NGOs have stepped into the vacuum to try to resolve this issue. However, as is often the case, a lack of coordination and communication within the international development community means that failed projects are being duplicated, successful projects are not being shared and some areas are overrun with support while others receive none at all.

Despite this, some organisations are demonstrating models that show a way forward. For example, Partners for Progress, a UK-based charity (of which I am chairman) supporting community development and education projects in rural Nepal, has partnered with the Lamjung regional government and Shree Jana Jyoti Secondary School to establish a vocational agriculture school in the rural village of Baglungpani. The college provides free post-secondary vocational education to students in the local area, teaching them sustainable agronomy and providing them with a government-accredited vocational diploma at the end of two years.

This project has allowed non-academic rural students the chance to achieve a qualification where no alternatives are available, to remain in education and to gain skills that will contribute to transforming the Nepali agriculture sector from subsistence farming to sustainable commercial agriculture for the future.

By bringing together international NGOs, the government, and the education system, technical, financial and political support could be provided for the project. Collaboration with local and national business leaders in the future also offers the potential to create good-quality domestic employment for those students in an expanding and modernising agribusiness sector. While this is only one example, other similar projects are beginning to emerge across the country and provide hope for a brighter future for rural students through vocational training.

There is growing support within the Nepali government for using technical and vocational education to transform the educational system. If enough political support can be cultivated this has the potential to diversify the workforce, increase human capital, and fuel national development through grassroots economic transformation. Through partnership between government, business, local actors and international NGOs, projects like these can be expanded in scope to include areas such as medical technology, culinary arts, automotive technology, plumbing, carpentry, IT, and electronics. If a coherent national strategy can be formulated Nepal will be able to move towards greater self-reliance and autonomy rather that near complete dependence on its Indian and Chinese neighbours.

Despite bureaucratic hurdles the expansion of the technical and vocational education sector was an important element of the government’s 2016 School Sector Development Plan which seeks to raise Nepal from one of the least developed countries globally through strengthening access to quality education.

While the future for vocational education in Nepal and its benefits look bright, it is important to remember that this cannot be a standalone endeavour, rather it should be combined with continued improvement of academic education across the country. Additional resources for art, music, and sport should be provided for schools to improve the quality and diversity of education experienced by primary and secondary students. Gender equality must also be central to this process through social reform, better access to education, and support for rural female students at all levels of education.

But perhaps mostly fundamentally, this has to be initiated and pursued by the Nepali government and local Nepali actors to ensure ownership of their national development and complete autonomy over the process of educational revitalisation.

Partners for Progress is a small international charity focused on education and community development in Nepal. Support their latest school project here!