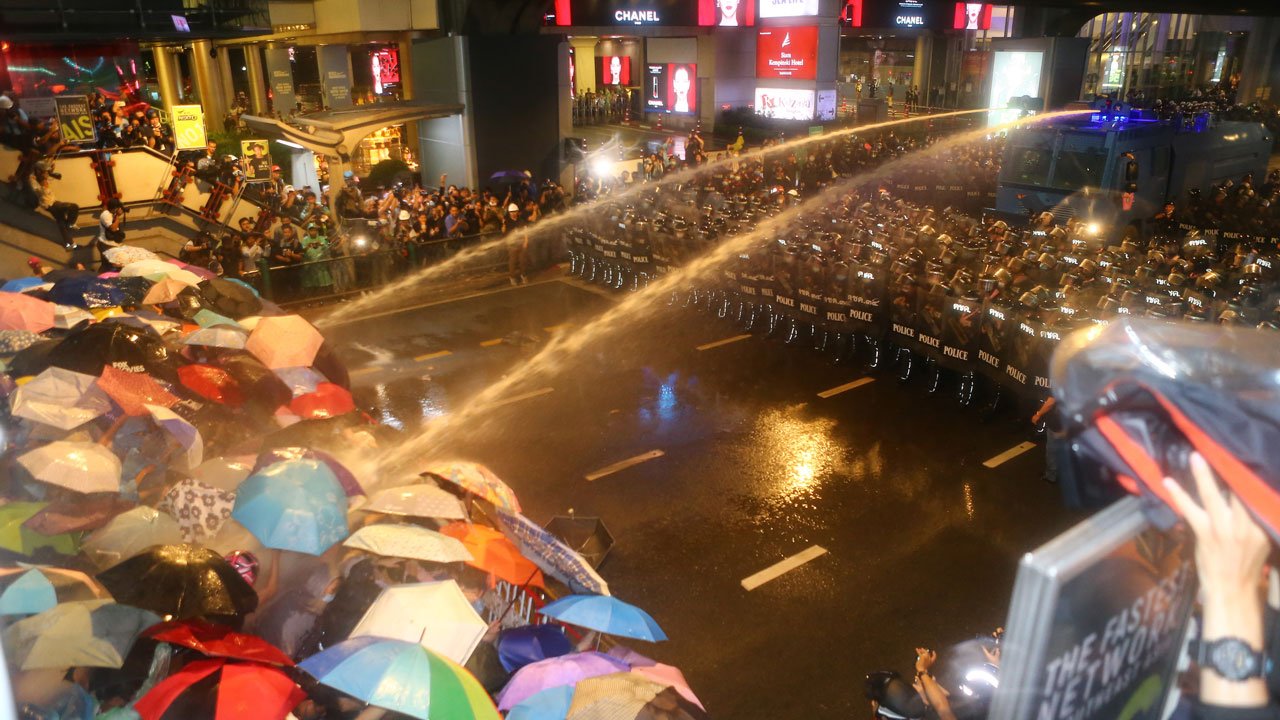 On 18th November, the Society was addressed online by Dr Paul Chambers of Naresuan University, Thailand. Dr Chambers spoke to the Society directly from Bangkok, just a few streets away from where pro-democracy protests were actively taking place.

The ongoing protests were the subject of Dr Chambers’ lecture. Dr Chambers described the genesis of the protests both in the context of the history of Thailand over the last century, but also how they arose from more recent political events. He also discussed how the situation might possibly develop. A theme of the discussion was whether the protests should be seen as a “breakthrough” in terms of offering an unprecedently move towards prospects for a more credible democracy and civil society in Thailand, or else as a “breakdown” which threatened a move into violence or further stasis.

Dr Chambers described the current situation. The current protests have lasted since the summer. They are led by younger people who are seeking a number of changes in Thailand’s politics. They are seeking not only the resignation of the current Prime Minister, Prayuth Chan-ocha, but also reforms to the constitution, the status of the monarchy, and the constitutional court. Their desire is to overhaul what many believe to be a “charade democracy”.

The current pro-democracy protestors are now encountering right-wing counter-demonstrators, known as “Yellow Shirts”. The Yellow Shirt protestors, according to Dr Chambers, have become increasingly prone to use violence against progressive protestors, including throwing projectiles. One Yellow Shirt was, on the day of the lecture, arrested in possession of a pistol. Nine progressive protestors have also, in different incidents, been shot. The wider political situation is also tense, with squabbles in the lower house of parliament, and complicated factionalism causing divisions in the Thai army.

A further hindrance to the development of democratic institutions has been the country’s frequent instability, which may be attributed to the monarchical-military partnership. Since 1932, there have been over 30 coup attempts, of which 14 have been successful – perhaps a record for any nation. The country has also had at least 20 different constitutions since 1932. These frequent coups and changes of constitution have prevented incremental and secure democratic development, and forced out prime ministers who have attempted to entrench “political space” and civil society. Thailand has been through frequent cycles where a prime minister has attempted to develop the organs and customs of democratic civil society, only to have these swept away in a coup, before the process repeats itself. The country thus should be seen as a frail democracy which has never had the chance to grow and sustain itself. As things stand, even if there were a properly elected prime minister and parliament, the country could not be seen as a proper democracy as the military and monarchy would still remain beyond the power of democracy.

The history, as well as the country’s economic circumstances, have left the population deeply polarised. Some, particularly the poor and disenfranchised rural population, as well the well-educated urban middle classes, want political change and the right to freedom of expression. However, there is a conversative part of Thai society which continues to be deeply attached to the institution of monarch and which does not want to see any change. It is easy for authoritarians to dominate the population which is split in this way.

The 2014 coup and its aftermath

The May 2014 coup was a milestone in the progress of the country towards the current protests. The coup took place after the then prime minister, Yingluck Shinawatra (sister of the earlier popular reformist prime minister Thaksin Shinawatra) had been in office for three years. The Shinawatra family was despised by royalists because it had attempted to increase the power of the civilian government at the expense of the royalists, and had also attempted to weaken the power of the aristocracy and landed elite. Since this coup the military has been in complete dominance, either directly or indirectly.

As soon as the coup occurred, soldiers began to round up suspected political opponents, who were taken to “re-education camps” for “attitude adjustment”. Many spent time in these camps. The military also took control of the judiciary. Military courts acquired the highest levels of authority, and a new constitution granted virtually unlimited power to the military command. The king, Bhumibol (Rama IX), who had reigned since 1946, was by this time old and frail, and the military (which of course supported the monarchy) were able to dominate.

2016 – Death of a king: accession of the unpopular son

Bhumibol died in October 2016. The late king, although he had not overseen any move to democracy or secure civil society in Thailand, had been a hugely popular, and indeed revered figure. He had been on the throne for 70 years. He made attempts to get to know the Thai people personally, with frequent journeys into the countryside, and projects for the benefit of the wider population.

His son, Vajiralongkorn (Rama X), did not evoke the same universal feelings of esteem across all sectors of Thai society. Aspects of his behaviour came in for criticism. He did not give the same appearance of caring for the people as his predecessor. He also did not give the appearance of wanting to even live in Thailand, but was content to use the country’s tax resources to fund his lifestyle. This gave rise to pent up anger amongst many in Thailand.

Also since the new king’s accession in 2016, there was a growth in the “disappearances” of anti-Thai royalists outside Thailand, with frequent rumours of assassinations. These rumours added to the hostility against the regime. The new king responded by attempting to further enhance the power of the military, and to centralise its control. In 2017, a new anti-democratic constitution came into force, which allowed for senators (members of the upper house of the Thai parliament) to be appointed by the military authorities. It also provided that senators could participate in the appointment of the prime minister, thus allowing a prime minister to be appointed without democratic approval, but under ultimate guidance from the military. Changes to the constitution were also prohibited without the approval of one-third of the senate, also thus effectively requiring any reform to have military approval. It also became impossible for any party to achieve a majority in the lower house.

Under these conditions, an election was held in March 2019. The influence of the military authorities meant that the elections were, as Dr Chambers said, “corrupted” by the military. They were responsible for the appointment of the election commission. They created and endorsed a particular party, Palang Pracharath (PP), and attempted to skew the results in its favour. Despite this, progressive politicians won the most seats, and yet following this the electoral commission sought to reformulate the formula for the allocation of seats in order to help the PP. Moreover, despite the better electoral performance of the progressives, the top military leader, General Prayuth Chan-ocha, was invited to be prime minister.

The anger which many people in Thailand felt at the behaviour of the ruling elite following the 2019 election continued to increase in 2020. The popular discontent was fuelled by a worsening economy, which was in its poorest state since the 1997 financial crisis. This was also aggravated by the impact of Covid-19. Many were exhausted by the situation, and by the fact that there had been no change in the leadership or government. Discontent was stoked by the dissolution of the opposition reformist Future Forward party in February at the order of the stacked constitutional court, and later on in June by the news of the assassination of another young anti-monarchist in Cambodia. It was in this context that the current protests began. In addition to the reforms mentioned earlier, the protestors are seeking constitutional amendments to make the senate fully elected, and to ensure the fair appointment of constitutional court justices, and election commissioners. Some are also seeking the reform of the monarchy.

The current parliament is considering these reforms, but they are unlikely, in Dr Chambers’ view, to be approved. The prime minister shows no sign of resigning. The king is engaged on a charm offensive, but at the same time he is encouraging right-wing Yellow Shirt counter-demonstrations. The police are employed in the front line against the progressive protestors. The army are deployed to the rear of the police. If the protests become violent, the king could endorse another coup.

This, in his view, was the most likely future. This would be a “new normal” in which generally peaceful protests become an everyday affair, similar to the trajectory followed recently by South Korea since the 1980s, where protests which were originally violent became more peaceful and accepted over time. This would be, in his view, a good outcome, as it could prompt incremental changes and reforms, and because the capacity for peaceful protest to be sustained was a part of a democratisation process. There could also be Yellow Shirt counter-protests, but these might also be similarly peaceful.

If, suggested Dr Chambers, right-wing protestors are encouraged and armed by the military, and armed, there could be violence as was seen in Thailand in the 1970s, with the killing of suspected leftists by by right-wing vigilantes. The right-wing goal would be to strike fear into the progressives in order to diminish their protests. This would be a worse outcome, with the prospect of greater instability and violence.

This would likely take place at the instigation of the king, and would be enacted through the unquestioning loyalty of the current army commanders. However, a coup could be increasingly problematic because of the rise in complicated factionalism in the military, and there would be no attempt to stage a coup, in Dr Chambers’ view, without the top command being absolutely sure of unity within the armed forces. General ? personally chosen commander,

With this, one scenario would be that the progressive protests either diminish in scale, or else the military is called in to restore order on national security grounds. New elections could be held which would be irregular and skewed in favour of military interests, or else a weakened opposition might be allowed to hold power temporarily, but with the end result being a further military or judicial coup. This would be a particularly negative outcome, ensuring stasis.

The current situation in unprecedented in recent Thai history, in that the demonstrations have let the “genie out of the bottle” and allowed Thais – in spite of draconian laws (Section 112 of the Criminal Code) prohibiting any expression of a perceived insult against the monarchy on pain of 15 years imprisonment – to speak about the prospect of reform of the monarchy, as well as increasingly voicing views about the removal of pro-military government and the need for reform. In this, the current situation represents a breakthrough.

On the other hand, it remains to be seen to what extent the Thai monarchy and military will tolerate hyper-pluralism and protest politics. If violence does not occur, it may be possible that demonstrators can incrementally bring about change. If violence does occur, it is most likely that the state will use it (or even manufacture it) to use force once again to retain power.