The Lawrence of Arabia Medal

The Lawrence of Arabia Memorial Medal was instituted in 1935 and is awarded in recognition of work of outstanding merit in the fields of exploration, research or literature. 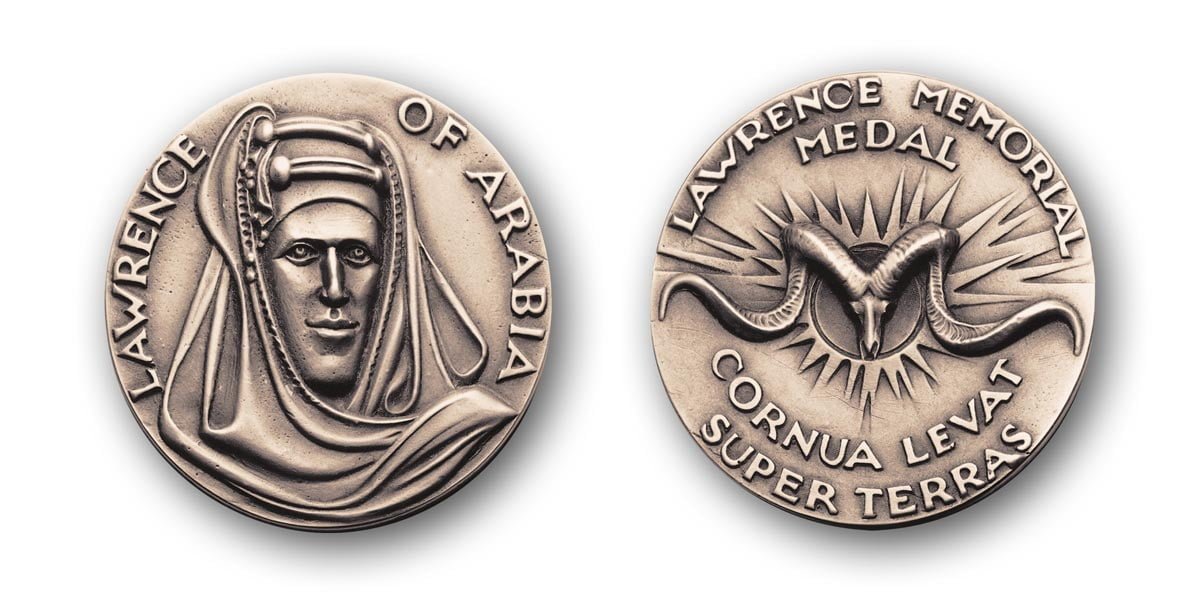 Michael Asher is a notable desert explorer who has traveled thousands of miles on foot and by camel. He has lived in Africa for much of his life. As a young man he served in the Parachute Regiment and the SAS. Later, he worked in The Sudan as a volunteer English teacher when he took to desert travel in Kordofan and Darfur, thence to Egypt along the ancient slave-trade route on which he based his first book In Search of the Forty Days Road. From 1982, Asher lived with the Kababish tribe in Kordofan for three years, after which he took a famine relief camel caravan to the Bejan people in the Red Sea Hills. In 1986, with his wife, he traveled 4,500 miles with camels to make the first recorded crossing of the Sahara from west to east on foot. in 1992, Asher crossed the Western Desert with a local companion from Mersa Matruh, Libya to Aswan, Egypt. With his wife, he has crossed the Thar Desert in India by camel and the Uruq-ash-Shaiba, the highest dunes in the Empty Quarter of Arabia. A further journey on foot was made on the pilgrimage route around Mount Kailash, Tibet. Asher has published twenty one books and has worked for the UN Agencies WHO/UNICEF, UNEP AND UNPOS involved in famine relief, training peacekeepers, human rights and disengaging guerrilla forces. for the British Council he trained police in Western Sudan and the Republic of South Sudan. He has campaigned for the preservation of the ecology of fragile desert and semi-desert environments as well as the forcible removal of indigenous peoples from then.

His desert journeys and his appreciation of their environments and indigenous people with whom he has traveled , in what is a fast disappearing way of life, together with his studies of Thesiger and Lawrence, make him a worthy recipient of the Memorial Medal, in pursuance of the Council’s resolution on 23 March 2016.

David Hempleman-Adams’s interest in adventure was inspired by The Duke of Edinburgh’s Award for which he holds a gold medal and is a Trustee. In 1998, he was the first person to achieve the Explorers’ Grand Slam; by climbing the seven highest summits in the world’s seven continents and reaching the magnetic and geographical North and South Poles.

In 2000, in the style of Jules Verne, he flew solo in a balloon across the Arctic Ocean to the North Pole. David broke five world records in 2007 when he flew the smallest gas balloon in an open basket across the Atlantic from St.John’s, Newfoundland to Nolay, France. In October 2008, David and co-pilot Jon Mason won the Gordon Bennett gas balloon race, the first time a British team had achieved this since the competition was launched 104 years ago. He has 46 Fédération Aéronautique Internationale world aviation records. David has recently returned from a two month long expedition on the north side of Everest. He successfully reached the summit at 8.05am on the 21st May 2011. He has now reached the summit from both the South and North sides.

He has held a passion and special interest in the Far East since he made his first visit to Nepal as a young intrepid explorer at the age of 20 when he trekked to Everest Base Camp. He has given hundreds of lectures and talks in schools on his expeditions to help educate young people and raise awareness of issues affecting remote regions including climate change and is a founder member of the Mitchemp Trust, a UK based charity supporting disadvantaged youngsters and giving them an adventure experience.

John Hare, a Fellow of the Royal Geographical Society and the Explorers’ Club of America has lectured to the Royal Geographical Society, the Royal Society for Asian Affairs, the United Nations, the Great Britain-China Centre, the Grocers’ Livery Company and the Scientific Exploration Society.
He has lectured in the USA to the National Geographic Society, The Smithsonian, the American Museum of Natural History, the Explorers’ Club, the China Institute, to Societies in Hong Kong, China and Kenya and to numerous schools and colleges. He has also lectured aboard the Queen Mary 2.

A regular lecturer at the RSAA, Colin Thubron CBE received his medal in 2001 for his literary output, lectures and broadcasts, the product of forty years of travel in Asia through which he has enlarged knowledge of its peoples and cultures.

Hugh Leach OBE spent his career as a soldier and diplomat in the Arab world and has served with both regular and irregular Arab troops. He is the Society’s Historian and the author of Strolling About on the Roof of the World.

He received the Lawrence of Arabia Memorial Medal in 1998 for exploration and research in Arab countries and NW areas of the Sub-continent, and leadership of Young People’s expeditions.

Mr. George Popov MBE was awarded his medal for his lifelong services as a locust control expert in Central Asia and Arabia.

Mr. Sandy Gall CBE received his medal for his hazardous inquiry into the intervention by the Soviet Union in Afghanistan and the consequences for that country. He has previously lectured to the Society and also written for Asian Affairs.

Sir Christian Bonington CBE is a British mountaineer. His career has included 19 expeditions to the Himalayas, including four to Mt. Everest and the first ascent of the south face of Annapurna.

Miss Elizabeth Monroe received the Lawrence of Arabia Memorial Medal for services to Arab studies. She has written extensively about a variety of topics including Philby of Arabia and the 1973 Arab-Israel War.

Prof. Robert Serjeant MA PhD received his medal for services in the Yemen and South Arabia. A fine Arabist, he worked extensively in Aden, as well as other parts of Arabia, and held a number of academic positions, including as Director of the Middle East Centre at Cambridge University.

A prolific writer for Asian Affairs, Sir Olaf Caroe was Governor of the North West Frontier Province 1946-47. After leaving India, he became a respected writer on Asia and the Middle East.

Sir Max Mallowan CBE was a prominent British archaeologist specialising in the ancient history of the Middle East. His excavations included sites at Ur and Nimrud, about which he published Nimrud and its Remains.

Sir Charles Dalrymple Belgrave KBE was a senior adviser to the rulers of Bahrain from 1926-57. He was responsible for the establishment of civil and criminal courts in the country, and he went on to write about Bahrain extensively.

Colonel Sir Hugh Boustead was a British military officer, modern pentathlete and diplomat. He earned two military crosses and was Commander of the Sudan Camel Corps during WW2.

Mr. D Neville Barbour was an Indian Civil Servant, Arab scholar and writer. A one-time correspondent of The Times, he took a particular interest in the Palestine, and was a staunch supporter of the Palestinians and their cause.

Brigadier Stephen Longrigg OBE DLitt received his medal is recognition of his work in Iraq and his books on political and economic development in the Middle East.

Dame Violet Dickson received her medal for her work amongst the Bedouin women of Arabia, and her study of desert flora and fauna.

Sir Wilfred Thesiger KBE DSO was an explorer and travel writer. Known also as Mubarak bin London (the blessed one from London), he travelled extensively in the Arabian Peninsula, Iraq, Iran and Pakistan.

Lord John Hunt CBE DSC was awarded the Lawrence of Arabia Memorial Medal for his 1953 conquest of Everest.

Lt Colonel F Spencer Chapman DSO served in Malaya during WW2, where his specialty was guerrilla warfare. He published a number of books about his travels including Lhasa: The Holy City and The Jungle is Neutral, which is about his time surviving in the Malayan jungle.

Sir Charles R Pawsey was a British military officer and colonial administrator. Hew as Assistant Commissioner to Assam and District Commissioner, Naga Hills during the Burma Campaigns 1942-44. The Battle of the Tennis Court was fought in the grounds of his bungalow.

Major General Orde Wingate DSO created the Chindits and is considered as one of the founders of modern guerrilla warfare.

Miss Alice Mildred Cable received her medal for exploration of the Gobi Desert. She joined the China Inland Mission in 1901, initially working in Shanxi and then in Gansu. With her two companions, Eva and Francesca French, she travelled 1,500 miles across Central Asia, to Russia via Siberia, and spent a year living in Xinjiang.

Captain C E Corry was awarded his medal for his work amongst the Marsh Arabs of Iraq.

Major General F G Peake (also known as Peake Pasha) was a British Army officer and creator of the Arab Legion. He served in the Sudan Camel Corps and later became Major General in the army of Transjordan.

Mr. Harold Ingrams CMG OBE is credited with ending the blood feuds of the Hadhramaut.

Mrs. Doreen Ingrams received the medal jointly with her husband for ending the blood feuds of the Hadhramaut.

cSir Charles Bell KCIE CMG was a Tibetologist and Britain’s de facto Ambassador to Tibet. He was at various times the British Political Officer for Bhutan, Sikkim and Tibet, and he participated in the Simla Convention in 1913.

The first recipient of the Lawrence of Arabia Memorial Medal was Lt. General Sir J B Glubb, the soldier, scholar and author who led the Arab Legion from 1939-56.

Michael Asher is a notable desert explorer who has traveled thousands of miles on foot and by camel. He has lived in Africa for much of his life. As a young man he served in the Parachute Regiment and the SAS. Later, he worked in The Sudan as a volunteer English teacher when he took to desert travel in Kordofan and Darfur, thence to Egypt along the ancient slave-trade route on which he based his first book In Search of the Forty Days Road. From 1982, Asher lived with the Kababish tribe in Kordofan for three years, after which he took a famine relief camel caravan to the Bejan people in the Red Sea Hills.His desert journeys and his appreciation of their environments and indigenous people with whom he has traveled , in what is a fast disappearing way of life, together with his studies of Thesiger and Lawrence, make him a worthy recipient of the Memorial Medal, in pursuance of the Council’s resolution on 23 March 2016.