HISTORY OF THE RSAA

Since its foundation in 1901 the RSAA has hosted lectures from leading explorers, academics and diplomats, and led expeditions across Asia.

THE HISTORY OF THE RSAA

The Central Asian Society was established in 1901. In November of that year, Dr Cotterell Tupp, Captain Francis Younghusband, Colonel Algernon Durand, and General Sir Thomas Gordon convened at Younghusband’s house in Gilbert Street, Grosvenor Square, London, to discuss the response to an informal prospectus they had circulated amongst friends during the previous month. They agreed that sufficient interest had been aroused and decided to formally distribute their prospectus for a new Society. The prospectus (“A Proposal to Establish a Central Asian Society”) began: “At present there is in London no society or institution which is devoted entirely to the consideration of Central Asian questions from their political as well as from their geographical, commercial or scientific aspect, though Societies such as the Royal Geographical and Royal Asiatic Society discuss these subjects incidentally. It is therefore proposed to establish a society to be called the Central Asian Society, with rooms, where those who either have travelled in Central Asia, or are interested in Central Asian questions, could meet one another.”

The “Central Asian questions” to which the Proposal referred derived from the political and diplomatic confrontation between Britain and Russia that continued throughout most of the nineteenth century. The confrontation was played-out in the Central Asian territories that lay between British India and Russia, and came to be known, after Kipling, as the “great game”. Many of the founding members and key figures of the Central Asian Society were active participants in the latter stages of this “game” of empires, as much of the material in the archive reflects.

On 1 January, 1975, the Society changed its name to The Royal Society for Asian Affairs, reflecting a shift of emphasis from narrowly Central Asian matters to an embrace of Asia as a whole. The shift of emphasis had already been marked (in 1970) by the renaming of the Society’s Journal as Asian Affairs. Formerly, Journal of the Royal Central Asian Society, the Society’s Journal has been published continuously since 1914. The present remit of the RSAA is the contemporary economic, political and social developments of every Asian country.

STROLLING ABOUT ON THE ROOF OF THE WORLD 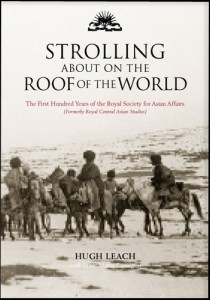 The history of the RSAA, Strolling about on the Roof of the World, is a fascinating read and provides great insight into exploration and espionage in Asia the early 20th century. It is written by the Society’s Historian, Hugh Leach, and RSAA members can purchase a copy for £18 plus p&p (£25 for non-members). You can order it online (see box on the top right of this page), or collect a copy in person from the office.

This volume covers the first one hundred years of the Royal Society for Asian Affairs, formerly the Royal Central Asian Society. It traces its origins from the Central Asian Question, within the context of the ‘Great Game’, and continues its fascinating chronology through the two World Wars to the present day.

There are separate chapters on its widely drawn membership, variety of activities and archive collection.
Throughout the pages are glimpses and vignettes of some of its extraordinary, even eccentric, members and their astonishing adventures. The wealth of factual and often amusing detail makes it a very lively account, which is also valuable as a work of reference for all interested in Asia.

The book is generously illustrated and includes some of the Society’s unique archival photographs not previously published. 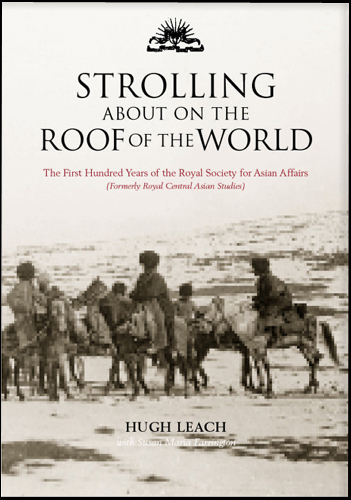 STROLLING ABOUT ON THE ROOF OF THE WORLD

The First Hundred Years of the Royal Society for Asian Affairs